As a recipe reader, I sometimes come across a picture of a big puffy pancake made in a pan and baked in the oven – often called a German Pancake. I’ve been curious about this German Pancake for years and finally this morning, a rainy morning at home with my husband, I decided to give it a go. Our friends Danny and Linda are coming for breakfast this weekend and I thought maybe I could offer something out of my ordinary repertoire.

I made the pancake and it was delicious and super easy.

The recipe I decided on however is not referred to as a German Pancake. It’s called David Eyre’s Pancake and it’s apparently a very old New York Times Cookbook recipe from the 1970s. Enduring still after 40 odd years. 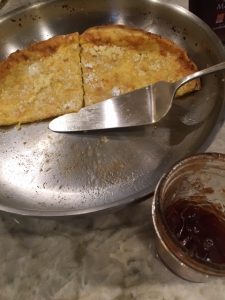 Pinch of nutmeg or grate a bit

Juice of half of a lemon

Combine flour, milk, eggs and nutmeg in a bowl. Beat lightly, leaving the batter a bit lumpy. Melt butter in a 12-inch oven tolerant skillet. When the butter is melted and very hot, pour in the batter. Bake for 15 to 20 minutes until the pancake is golden brown and puffy. Remove from the oven and sprinkle with the sugar and then return to the oven briefly. Sprinkle with lemon juice and serve with jelly, Batch-33 jam or maple syrup.