Alan and I spent the month of October in Mexico. We have been many times but never for such an extended period and it seems that the more time we spend in Mexico the more we appreciate the Country and the warmth and openness of the people. Alan’s first stop was in the Mexican Central Highland city of Queretaro where he was a Global Volunteer teaching English to College students for two weeks. He worked with over 300 students with his mission to speak English with them (and of course he also took every opportunity appropriate to work on his Spanish).

My first stop was Oaxaca City and nearby Villages, where I wandered the aisles of the Mercados of 20 de Noviembre, Ocotlan, and Tlacolula, looking for inspiration and cooking and culinary tools, pottery, implements, moles, cheeses, spices, herbs, fruits and flowers (I buy my vanilla in Mexico – it comes from Veracruz and it is fresh and moist and full of flavor. I also buy my dried chiles there which are plump and moist and unlike any that I have found here); I visited ancient cities now in ruin; met with textile artists for table and kitchen linens; met with the owner of an artisanal mezcaleria; I visited the Puebla of San Marcos Tlapazola for red clay pottery; and I visited the studio of Fernando Olivera an amazing and intense Oaxacan painter (our cultural guide Anna Preciado took us to meet Fernando).

Later in San Miguel Allende I was tempted by and purchased exquisitely one-of-a-kind, hand-painted dishes and pottery from Michoacan. Over-riding the cultural and visual experience was the survey of the traditional and experimental food scene in each city we were in. The food, the food, the food, the food, from street vendors with carts of corn and hielado and tlayudas, to food stalls in the Mercados to exquisite restaurants (check out Criollo in Oaxaca City). I had the pleasure of doing market research for my jam business (I was just approved for my Cottage Industry Permit last month!!). From trip to trip the food scene is changing which is wonderful for the consumer and researcher!

For two days I stayed with my Aunt Roberta and shopped at the Mercado with Theresa who works for my Aunt. Theresa let me trail her around the kitchen and I learned more about making salsas; roasting tomatillos, tomatoes, soaking dried chiptole chiles, proportions of each for a tasty salsa; and using the addition of nuts in salsas. Since it was during Dia de Los Muertos there were special foods for sale and special things to make to eat.

I then stayed for five days at Casa de Bugambilia with friends who came into town (Mary, Anna, Martha and Lenore – my book group). We toured the ruins of Yagul and went to see the petrified waterfall at Hierve el Agua. We saw churches and museums and we went to San Antonino for textiles. We went to the studio of Josefina Aguilar the famous sculptor who is now blind but still greets her guests. Anna took us to Fernando Olivera’s painting studio where we all bought original works of his art. We ate at Criollo which knocked my socks off and at a weird neighborhood restaurant near the Panteon (cemetery) where – because I am a vegetarian – I was served purple Pata (apparently not considered meat and therefore suitable for a vegetarian. Notably, pata is animal cartilage although I did not know it at the time – not a traditional vegetarian item . . ..). Notwithstanding the shock of the purple pata, it was a fabulous whirlwind few days.

After 10-days in Oaxaca I snuck home for a few days and then flew back to Mexico to meet up with Alan in Queretaro. Alan showed me around Queretaro for three days and then we travelled to Guanajuato a beautiful Colonial city where the Cervantes Festival was in full bloom. After three days in Guanajuato we boarded a ‘first class bus’ to the beautiful city of San Miguel de Allende. In San Miguel Allende we discovered an old fabric mill turned into art gallery spaces. The place was crawling with Americans, Canadians, and Germans – mostly women my age – all face painted up for Day of the Dead. One of the gallery spaces was displaying stunningly beautiful hand-painted dishes from Michoacan.

The dishes are gorgeous and irresistible and exactly what I need to further promote my jam and this food blog! They are en route to my house and I await their arrival! After roaming the Mercado and shops and botanical gardens of San Miguel Allende, we took the first class bus to Mexico City for a few days. It was an extraordinary month. We saw so much and learned so much and I am so inspired by the colors, the flavors, the smells, the food, the arts, the innovation, the resilience, curiosity, and the creativity of the artists, artisans, and food people (home cooks, professional chefs, farmers, shoppers, cheese makers, mescal growers and sellers) whom I met and observed and learned from.

Now that I am home – so inspired and influenced by all that I saw and ate over the last month – the food that I am cooking is full of fire and spice. I am stretching out from my comfort zone and experimenting with chiles and fruits and spices in ways I have not done before. I think my family’s mouths are on fire!!

Since I have been home I made chicken stock and then used the cooked chicken for enchiladas. I had some green salsa/sauce for half and for the other half I made salsa/sauce from onions, garlic, tomatoes, cumin, pepper, chipotle in adobo sauce, sour cream. Boy was that ever a hit! Enchiladas divorciados. I made a hatch chile dip with sour cream and I made a pork, collard, and posole stew with chipotle in adobo sauce. Unbelieveably delicious. See the recipe below. And there is so much more to come. . .. 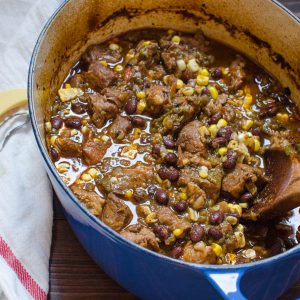 3 pounds boneless pork butt, cut into 2-inch squares (I had the butcher cut it)

Soak the hominy in plenty of water overnight, drain. Season the pork squares all over with 1 tsp of salt and the black pepper. Heat the oil in a large pot over medium-high heat. Sear the meat in batches until well-browned on all sides. Transfer to a plate. This could take some time so get mellow and relax into it. Maybe listen to a book on tape or a dharma talk. . .. Add the onion to the pot and cook until soft (5 to 7 minutes).

Add the garlic, chile powder, cumin, oregano, bay leaf, and cinnamon. Cook for 1 minute. Return pork to the pot. Stir in the chipotle, hominy, beer, 6 cups of water and 2 tsp salt. Simmer covered for an hour and then uncover and simmer for another hour to hour and a half until the meat and hominy are tender, adding water as needed if too thick. Stir in the collards for the last 20 minutes. Discard the Bay Leaf and cinnamon. Taste and adjust seasonings. Ladle into bowls, garnish with lime, cilantro, avocado and radish.