To say that my family is quirky is probably generous (just ask my older brother Eric). I won’t go into the gruesome details of the craziness but here’s one weird thing: My husband is Alan; my Father, Allen; my step-daughter’s boyfriend, Alan; our daughter-in-law’s Father, Allen. My son is Alex; his girlfriend is Alex; my step-daughter is Alex. It’s weird right? Maybe a bit confusing at times. Anyway – this year, my year to have Thanksgiving at my house, we had just one Alan (my husband) and all of the Alexes. My son’s girlfriend Alex brought her parents Craig and Barbara and they’re lovely. Also, my dear dear neighbor Pam and her son Owen graced our table as did my Mother. It was a sweet, lovely day for a small gathering of my closest people. It was super warm out and we ate our Thanksgiving meal al fresco on the back deck on the enormous wooden picnic table that I just inherited from Disa who spent the past 7 weeks clearing out her parent’s home on Bloomfield Street in Sherman Oaks – the street we grew up on. Disa moved all important items (except for the picnic table that she gave to us) to her home in Denmark, following her parents’ deaths this past year.

Sadly, but also with grace, my sweet Father died the week before Thanksgiving so it has been a special and bittersweet time of gratitude for us. We are so thankful that we had him for as long as we did, relief that he isn’t suffering any, and sadness that he’s gone. Although I have not celebrated this particular holiday with him in many, many years, just by the nature of the holiday we wanted to acknowledge that his presence on earth, in our lives, will be missed. We made a special toast to him, his love of life, his wit and wisdom. I hope that if there’s any of ‘him’ or his energy left that it’s in a super beautiful, fun place – my notion of heaven.

This was the first year that I agreed to let people contribute to the meal. I am working on letting go of some things AND it makes people happy to contribute – I know how much it means to me to be able to do that. Pam brought delicious green beans and a signature cocktail – both excellent and completely consumed. Barbara, Alex’s mother, brought a charcuterie platter (items came from the new Eataly and were gorgeous and delicious in an arrangement that has inspired me) and a homemade pecan pie – both beautiful and delicious. Alex brought a peach pie from her employer Wolfgang Puck and she made some fabulous, delicious dinner rolls. The dinner roll department has historically been my nibling Ezra’s department but they were up in the Bay Area working – we missed them. Alan (my husband) cooked the turkey. This year, at the urging of our friend Roberta Reid, we purchased a Belcampo turkey and brined it. A new experience and it turned out quite fine.

I think next year we will return to the traditional organic, reasonably priced bird and a regular oven roasted, non-brined, non-bagged, non-deep-fried, non-BBQ’d turkey. Just a regular plain old oven roasted turkey. Which is what Alan wanted to do in the first place. Notably, I read an article about Thanksgiving in the Times this past month and the writer said – by all means make a turkey for Thanksgiving – but make something else as well because most people do not really like turkey all that much. He suggested a pork roast or a standing rib roast or a ham. Something spectacular. And next year I think that I will take that advice and make a small bird and a something else. Our friend Bob Hacker brought me a taste of the pork roast that he BBQ’d on Thanksgiving along with the traditional oven-roasted turkey that he made, and I have to say that it was delicious. I’m on board.

My tried and true Thanksgiving recipes have previously been posted to Batch-33 and are searchable using the word “holiday.” I think all the Thanksgiving holiday recipes are worth preparing. My mother’s cornbread stuffing is to die for. Her signature apple pie is the best EVER. I have a couple wonderful recipes for cranberry sauce and relish on this site. The chocolate pecan pie I have made for many many years combining a few recipes into one to achieve a good pie! And now, I am going to post Alex Paisley’s aunt’s recipe for Rich Dinner Rolls which I believe comes originally from the Pillsbury Best of the Bake-off Cookbook (but I’m not sure). 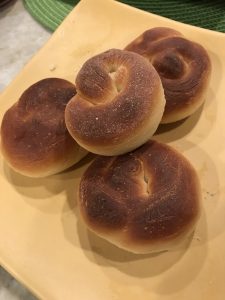 ¼ cup margarine (butter would probably be ok too)

Measure warm water into a large warm bowl. Sprinkle in yeast; stir until dissolved. Set aside.

Turn out onto a lightly floured board; knead until smooth and elastic, about 8 to 10 minutes. Place in a greased bowl, turning to grease the top of the dough. Cover; let rise in a warm place, free from draft, until doubled in bulk, about 30 minutes.

Punch down. Turn out onto a lightly floured board. Make pan rolls or form into desired shapes.

Cover the rolls and let rise in a warm place, free from draft, until doubled in bulk, about 30 minutes. Brush lightly with melted margarine or butter.